The Autumn Defense - Why Don't We

The Autumn Defense is an American duo composed of John Stirratt who used to play bass in Uncle Tupelo and Wilco and partner Pat Sansone whose work includes playing for Joseph Arthur and Josh Rouse. The latter could actually have written "Why Don't We", the best track on the band's new album Fifth (no points gained for guessing how many albums The Autumn Defense have released), a laid back, bossa nova-flavoured soft rock masterpiece reminiscent of 70's delights such as America, Bread, Billy Joel, certain Fleetwood Mac tunes, Steely Dan, Doobie Brothers, Jackson Browne and so forth and so on. It's up-tempo and utterly tuneful, a perfect summer song if I ever heard one. 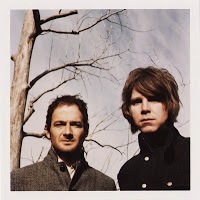