Maverick British singer/songwriter Ed Sheeran - still only 23 years old - is preparing his second album x (pronounced "multiply"), and in doing so popping up here and there, including the odd soundtrack work. He's written the theme song for the movie version of John Green's novel The Light In Our Stars, the beautiful "All Of The Stars", and of course "I See Fire" for Peter Jackson's latest Hobbit movie. Two days ago he appeared on the BBC show "Later with... Jools Holland", performing a brand new song called "Thinking Out Loud" with Holland, formerly of The The, Squeeze and more, doing piano duties, helping out Sheeran and his acoustic guitar to great effect. The thing with Ed Sheeran is his amazing songs. He's an old school tunesmith, a true craftsman, and very, very good at it. "Thinking Out Loud" could be exhibit A in any court. 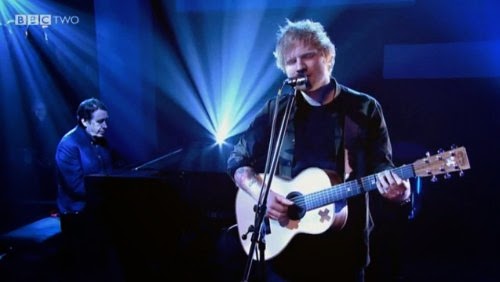