Transvision Vamp - I Want Your Love

Transvision Vamp was a late 80's/early 90's British rock band fronted by Wendy James, a platinum blonde singer who really knew how to pose. Their finest moment was undoubtedly "I Want Your Love" from their 1988 debut album Pop Art, a song that peaked at number 5 in the UK singles charts and even went to number 1 here in Norway. There's nothing about this song and its video that is not sexy, from Wendy James' raw cooing, oooing, aahing and screaming, to the other band members' cool-looking wallowing in rock'n'roll cliches to the song itself which utilizes every trick in the book. Basically the song does the same as Billy Idol, The Cult and other acts did when they were in peak form, and it's fun, sexy, hedonistic and very catchy! I love it! 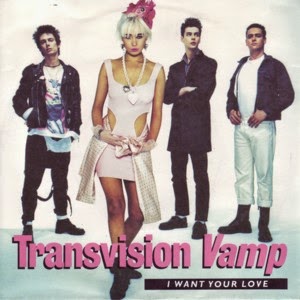