Susanna - Lay All Your Love On Me

Norwegian recording artist Susanna Wallumrød has received quite a bit of international attention for her music. She's especially well-known for her interpretations of other people's work, giving the music of artists as diverse as Kiss, Joy Division, Depeche Mode and Dolly Parton an ethereal, otherworldy sheen. No wonder then that best-selling Irish supernatural thriller writer John Connolly also fancies her music. I'm currently reading his latest novel The Burning Soul featuring his protagonist Charlie Parker, and in a scene in a cafeteria in a small town called Pastor's Bay, Parker hears Susanna Wallumrød's version of ABBA's "Lay All Your Love On Me", describing it as "soft, and sad, and haunting, but not depressing".

Susanna has so far released three well-received albums as a duo with Morten Qvenild under the moniker Susanna And The Magical Orchestra, but she's also doing solo albums in-between. The second of these, Flower Of Evil, was released in 2008, and it is from this that her version of "Lay All Your Love On Me" is lifted. Hope you like it as much as I do, or for that matter, as much as John Connolly does. 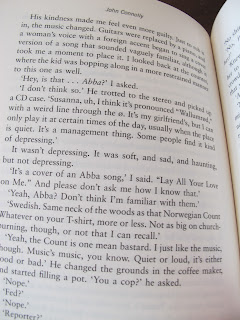