As someone points out in the commentary field to this music video - "there's barely any stars here in America that actually wears clothes in a music video". Well, Alicia Keys does wear clothes, looking gorgeous sitting by her grand piano, and performing "Doesn't Mean Anything", one of several great songs off her latest album, the 2009 release The Element Of Freedom. As opposed to loads of the competition, another great thing about Alicia Keys, is that she doesn't do her vocal exercises on record, but rather sings the hell out of most people. A very good thing indeed! 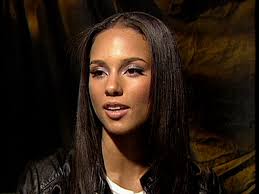