Happy birthday to Meat Loaf, or Marvin Lee Aday as his mother knew him, who's 64 today! His famous duet with Ellen Foley, "Paradise By The Dashboard Light", is probably the only eight minute plus epic about teenage sex that's reached the upper reaches of the world's charts. As part of the song cycle that is the Bat Out Of Hell album released in 1977, it's songwriter and producer Jim Steinman's most grandiose effort, and that says quite a bit. At the end of the day it's pompous, loud and great fun. If Meat Loaf never bettered this (he even released two lame follow-up Bat Out Of Hell albums in 1993 and 2006) doesn't matter much as long as we've got this. 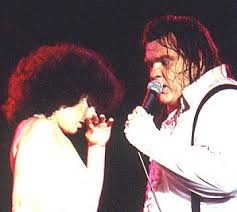