Duran Duran - Anyone Out There

"Anyone Out There" was the fourth single off Duran Duran's eponymous 1981 debut album and one of my favourite Duran songs actually. Come to think of it, the entire album is great, a versatile and adventurous record that's grossly underrated by many. Duran Duran were frontrunners of the new romantic scene along with bands like Visage, Ultravox, Spandau Ballet and Human League, and like most of these, unjustly overlooked and often ridiculed, referred to more as posers than musicians. Well, I don't mind that too much, but still, iit has to be said from time to time. 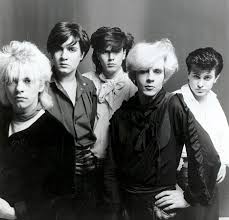