Queen singer Freddie Mercury - most flamboyant pop star of all time - would have been 65 today but sadly died in 1991, a mere 45 years old. His legacy remains though, and although the surviving band members have tried to replace him it's proved impossible. Nobody replaces Freddie. It's as futile and/or stupid as trying to wake a sleeping bear or something. The musical We Will Rock You has on the other hand become mindbogglingly successful, but what we crave is the real thing. Here's Freddie and Queen in a 1978 clip, with the great ballad "Spread Your Wings" off the previous year's News Of The World album. It only reached 34 on the UK charts upon its release and is therefore not featured on Queen's Greatest Hits album, one of the best selling albums of all time. It does however, remain one of my favourite Queen tracks. 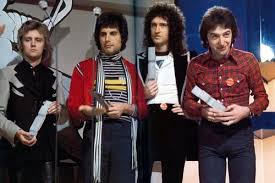