Talking Heads - Burning Down The House

Talking Heads' funky "Burning Down The House" was a hit single from the 1983 album Speaking In Tongues. It had been two and a half years since the band released their masterpiece Remain In Light, a lot of time in those days, and they had changed direction from a harder-edged industrialized sound to a more poppy and commercial one. They were rewarded for it too. "Burning Down The House" became their biggest hit, and who knows? It might be justified. It's a great song! 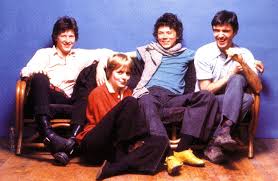