Orchestral Manoeuvers In The Dark - Souvenir

Liverpudlian duo Orchestral Manoeuvers In The Dark - OMD for short - was among the most important electronic acts in the post-punk era. They formed in 1978 and made their eponymous debut album AND the follow-up, Organisation, in 1980. 1981 saw the release of Architecture & Morality, by many regarded as their most important album, featuring two songs about Joan Of Arc (!), and this wonderful single, "Souvenir". Together with 1991's "Sailing On The Seven Seas", it's their highest charting UK single, reaching number three. "Souvenir" is simply a very pretty synth-pop ballad. Good memories here! 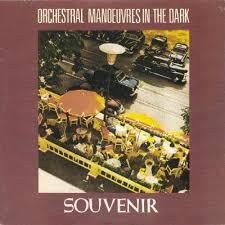