Norwegian punk band Kjøtt (Meat) had a short lifespan, producing two EP's, one single and one proper album, between December 1979 and May (I think) 1981. The album was called Op. and signaled a clear change of direction from simplistic straightforward punk rock to a more mature and adventurous sound. One of the key tracks was "Beat Allegro 160" and there was even produced a music video to the song. The band, fronted by now deceased singer Helge Gaarder (brother of famous author Jostein Gaarder of Sophie's World fame), showed real ambition with the album, but fell apart soon after its release. Their influence on Norwegian rock music can't be overestimated though. At the time Norwegian rock was a sad affair altogether, and in true punk/D.I.Y. spirit Kjøtt helped paved the way for more people to make music in this country. 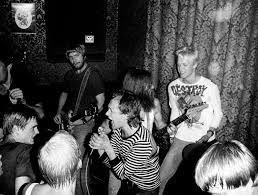