One of my all time favourite female singers, Helen Folasade Adu, more commonly known as Sade Adu, lead singer of the band Sade, sings more beautifully than most, and the band's songs are delicately structured compositions where pop and jazz meet and head for higher territory. There is an elegance to their songs rarely if ever found in popular music with Sade's silky smooth voice lying perfectly over subtle musicianship and ever so cool arrangements. I've never seen the band in the flesh, but I've seen a couple of their concert films, and they are remarkable. I'd really, really love to see them some day. For now though, we're headed for one of many classic videos, the beautifully shot "Cherish The Day", in black and white, with Sade on top of a New York City skyscraper, and as this song is off 1992's Love Deluxe album you can also see the Twin Towers in the background. An amazing song! 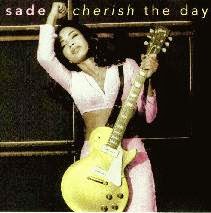