The Mavericks - Dance The Night Away

Wehey! It's Fabulous Friday again and I so wanted to hear a Mavericks song. The reformed Florida country band has just released an awesome new album titled Mono which is SO much better than the 2013 comeback album In Time, but for the Fab Friday entry we really want to head for classic territory, going for the party classic "Dance The Night Away" from the 1998 album Trampolene. The video is of course great fun too. Have a look at this, then head over to my previous Fabulous Friday pickings. 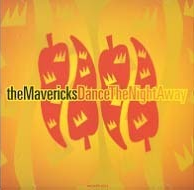