Ultravox Mk. 2, meaning with Midge Ure as singer as opposed to John Foxx who fronted the band's first three records, pretty much epitomized the short-lived New Romantics movement for me. Along with acts like Simple Minds, Visage, Spandau Ballet, Human League and Duran Duran they were the soundtrack to my adolescence and, as such, incredibly important to me. Their 1982 album Quartet is really out there, pompous, loud and seriously pretentious, but I can't help loving it dearly. "Hymn" is one of its key tracks, an over-blown, over-produced monster with Ure's strained vocals doing the song no favours. I can hear its many faults, but still it's a favourite of mine. I will always cherish this song. 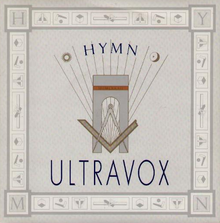