Randy Newman - It's Money That Matters

You can't beat Randy Newman for wit and sarcasm in popular music. He is the true master, sometimes a bit subtle, sometimes not subtle at all. His 1988 single "It's Money That Matters" has absolutely no subtlety about it, and is an unapologizing rant against the greed of the late 1980's (think Michael Douglas's Wall Street character Gordon Gekko) that quiet a few people came to loathe. But have things changed since then? There's a good argument going for nothing having changed at all, if anything, things might have gotten worse. But "It's Money That Matters" is more than an angry comment on how money and power corrupts, it's also a hell of a good song, featuring Mark Knopfler on guitar in excellent form, and a sing-a-long chorus of the highest order. I had never seen the music video until now, by the way, an appropriately sarcastic little clip that goes very well with the song. 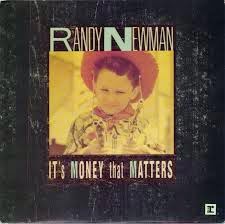