Baz Luhrmann's 2001 film Moulin Rouge! is a favourite of mine, pairing Ewan McGregor and Nicole Kidman in a musical romance set in Paris' Montmartre district in 1900. The film is a feast of colours and extravagant musical numbers, and "Come What May", written by the brilliant David Baerwald (once of David & David "fame), is the "love theme". This remix however, turns the beautiful ballad into a brilliant and in every way very charming dance track. It's never been released commercially as far as I know, but the video was among the extras on the DVD release and, I'm sure, on the Bluray version as well. I love this clip. 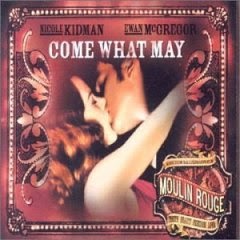