Petula Clark - This Is My Song

"This Is My Song" was written by Charlie Chaplin in 1966, intended for his film A Countess From Hong Kong, which was to evoke 1930's shipboard romances. Chaplin wanted Al Jolson to sing it and was so intent on his wish that he refused to acknowledge the fact that Jolson had died in 1950 until he was shown a picture of his tombstone. In the finished film the song was only used as an instrumental, but Chaplin gave it to British singer Petula Clark who lived near his own home in Switzerland to record. It was released as a single in 1967 and Clark was furious as it was intended as an album track only. Then, when it became a number one single, her first since "Sailor" six years earlier, she was presumably quite happy. (Her most well-known single, "Downtown", only reached number two on the UK charts upon its 1964 release although it was a number one hit in many other countries, including the US.) Needless to say, "This Is My Song" is stunningly beautiful. 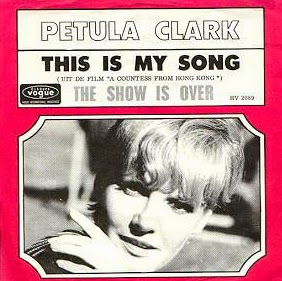