The Wagoneers - I Wanna Know Her Again

Why fame eluded late 1980's country music band The Wagoneers remains a mystery when you listen to their debut single "I Wanna Know Her Again". It's an utterly amazing, understated "old school" country song. The band released two albums, Stout And High (1988) from which "I Wanna Know Her Again" is taken, and Good Fortune (1989), both great. Lead singer Monte Warden went on to a mildly successful solo career. The band recently got back together, and are currently shopping for a record deal. The two old albums have been digitized for an upcoming reissue called Essential Wagoneers. This will be a 25 song compilation featuring three unreleased gospel numbers from 1988.

You can also visit this MySpace page to listen to a few more of the band's songs. 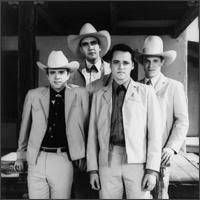