A forgotten gem, Roaring Boys' "House Of Stone" was the one single that could have made this obscure 80's band famous, but sadly didn't. It's highly influenced by Roxy Music of the Avalon era and almost sounds like an outtake from that album. Beautiful song and sadly unavaliable, I'm afraid. The song is from 1985, if I recall correctly, from what I believe is the only album Roaring Boys recorded. Maybe reissue specialists Cherry Red could rerelease the album? 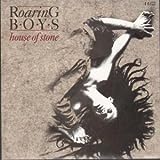