A star-studded tribute album to the late great Buddy Holly is due on July 4th, celebrating what would have been his 75th birthday, whereas he only got to be 22 when he died in a plane crash. Among the artists on the album titled Rave On Buddy Holly will be Lou Reed, Paul McCartney, Cee Lo Green, She & Him, My Morning Jacket, Graham Nash, Kid Rock, Nick Lowe, The Black Keys and several more. There was also a tribute album released 15 years ago, mainly featuring country acts, called Not Fade Away (Remembering Buddy Holly). You can listen to The Black Keys doing "Dearest" and Julian Casablancas perform "Rave On", as well as checking out the press release and see the complete list of songs here. 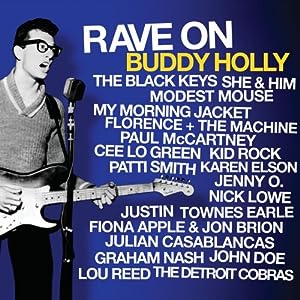