Talking Heads - This Must Be The Place (Naive Melody)

Recorded over three nights in December 1983 and released in 1984, director Jonathan Demme's Talking Heads concert film Stop Making Sense is a memorable experience, another of my favourite concert movies. The performance of "This Must Be The Place (Naive Melody)" features a well-dressed David Byrne, the other original band members and a few additional singers and musicans, and a lamp, this is what can be called "light performance art", very New York in every way, and very good, of course. The song is from the recently released Speaking In Tongues album, which they were supporting doing these shows. 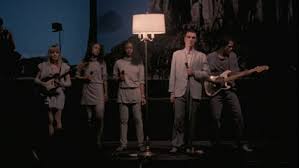