Roy Orbison - Only The Lonely

A Black And White Night featuring Roy Orbison "and friends" is one of the best concerts ever put to tape. Recorded in January 1988, 11 months before Orbison passed away, a stellar cast of celebrity admirers joined him on stage for a set consisting of the most famous of his many hits. He was backed by Elvis Presley's TCB band - Glen D. Hardin on piano, James Burton on lead guitar, Jerry Scheff on bass and Ronnie Tutt on drums - as well as Elvis Costello, Bruce Springsteen, Tom Waits, Jackson Browne, J.D. Souther, Steven Soles, Bonnie Raitt, Jennifer Warnes and k.d. lang. It's an amazing show, and here's one of my all time Orbison favourites, the utterly lovely, extraordinarily beautiful "Only The Lonely", originally cut in 1960 for the Monument label. Which reminds me, do buy the recently released The Monument Singles Collection. 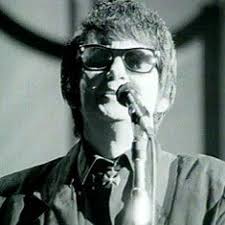