"Everything Counts" was the first single to be released from Depeche Mode's third album Construction Time Again (1983). It signaled a new and more industrial direction for the band who lost their songwriter after their first album and tried to find their own way with the second. That was actually quite successful in itself, but it is upon the blocks they built with Construction Time Again they found their future sound. "Everything Counts" is a hell of a song really! 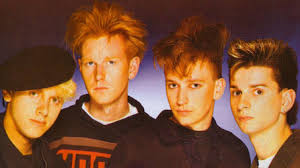