Tom Waits - On The Nickel

"And if you chew tobacco and wish upon a star, you'll find out where the scarecrows sit, now they just look like punch lines between the cars." That''s what I call poetry. It's lifted from Tom Waits' stunning piano ballad "On The Nickel" that ended up on his 1980 album Heartattack And Vine, but was indeed written for Ralph Waite's film also called On The Nickel. In this live clip Waits describes the song as "kind of a hobo's lullaby" which seems pretty accurate to me, also in regard to the film. It's a brilliantly beautiful song, only performed by Waits on his grand piano in the clip below, but on the album featuring a wondrous string arrangement. Both versions are fantastic. 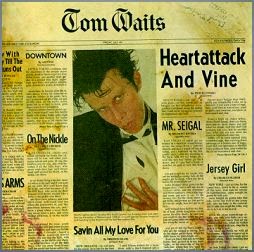