"It's Five O'Clock Somewhere" is, as the title suggests, a true party song. Country singer Alan Jackson also enlisted Jimmy Buffett to enter towards the end of the song, turning what's already a pretty good party in itself into a stint in Buffett's fictional paradise Margaritaville. The song was written by Jim "Moose" Brown and Don Rollins and featured on Jackson's 2003 compilation album Greatest Hits Volume II. And if this does not get you in a good mood, nothing will. 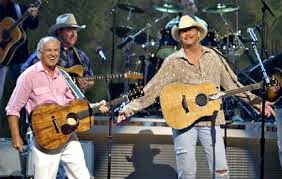