An unlikely pair of Texans considering their names, but Danny Wayland "England Dan" Seals (who later recorded under the name Dan Seals) and John Edward "John Ford" Coley are indeed children of the Lone Star State. "I'd Really Love To See You Tonight" doesn't exactly sound as if it comes out of Texas either, a soft rock anthem if I've ever heard one. It was a huge hit in 1976 and appeared on their album Nights Are Forever. Great pop song! 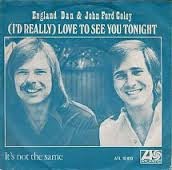