The song "Just In Time" first appeared in the 1956 musical Bells Are Ringing, and has been recorded by a wealth of acts through the years. This 1962 version from Nina Simone's live album Nina At The Village Gate is simply astounding, showcasing her inimitable piano style for everything it's worth. I actually became aware of it through Richard Linklater's film Before Sunset, the second in his trilogy about Jesse and Celine (Ethan Hawke and Julie Delpy) who meet on a train headed for Vienna. Before Sunset is a film with a few flaws, it has to be said, but the last scene in which they listen to this recording is pure movie magic. 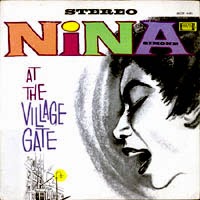