Unni Wilhelmsen feat. Paal Flaata - This Means You To Me, Now

Unni Wilhelmsen is an award-winning Norwegian singer/songwriter who's made a series of good albums, all of them in English, save for one, the excellent Til meg (2006). "This Means You To Me, Now" however, is taken from her 1996 debut album To Whom It May Concern. This song means a lot to me, as it was one of the songs my wife and I played a lot when we started dating. Upon the album's release I interviewed Unni about this particular song, not bothering too much with her the rest of the record as such. I think she found it a bit strange, but she was still willing to talk in length about it. My memory is of course lacking, so I won't try to recreate her explanations, but just state for the record that it's an absolutely marvellous song, a beautiful up tempo ballad about, yes... love. It's a duet with the esteemed Paal Flaata, one time singer in the band Midnight Choir, and quite possibly the best singer in Norway. 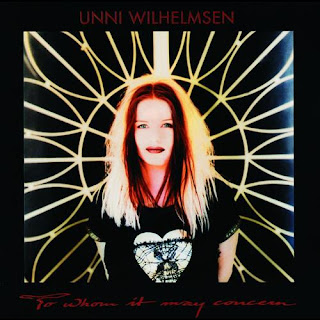