The Scottish trio Cocteau Twins fronted by vocalist Elizabeth Fraser made some of the most atmospheric and mysterious-sounding music ever recorded for the 4AD label in the 80's. My favourite album of theirs is 1984's accurately titled Treasure, featuring the song "Amelia" as one of the highlights. It's got all the major hallmarks of the band, including Fraser's vocal gymnatics at its best. Her siniging is out of this world, unlike anything I've heard before or since. Most of the words are sung in a kind of made-up language not recognizable as English or anything else, and that's of course part of the attraction. "Amelia" is simply an utterly beautiful song. 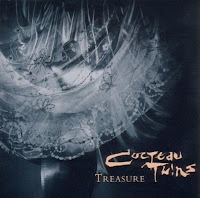