The Beatles - Love Me Do

October 5th 1962 is one of the most important dates in the history of pop music. Exactly 50 years ago today, The Beatles released their first single "Love Me Do", and music changed forever. Although they wrote and recorded loads of songs that are better, there's no way to argue against "Love Me Do" being a fantastic pop song. It was mainly written by Paul McCartney, but as with all Beatles songs written by him or John Lennon it's credited Lennon/McCartney. 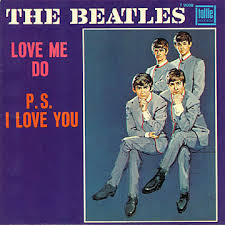