The Jags - Back Of My Hand

Pub rock, power pop, whatever they played, British rock band The Jags had one hell of a good song in their 1979 hit "Back Of My Hand". Written by singer Nick Watkinson and guitarist John Alder it's a frenetic three minutes of instantly likeable guitar-driven pop music. It reached number 17 on the UK singles chart, and was one of two The Jags singles that can be classified as "hits". The other one, "Woman's World", didn't reach higher than number 75. The band only recorded two albums before disbanding in 1982, but they'll live on thanks to "Back Of My Hand". 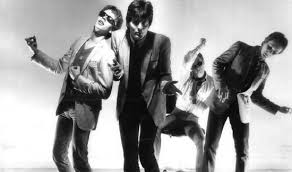