Depeche Mode's 1984 single "Master And Servant" was deemed "controversial" and "problematic" due to its flirtation with S&M, but it's a fabulous song. This is Depeche Mode at the height of their "industrialist" period, combining their trademark synthesizer sounds with those of hammers and anvils, drum machines, killer pop songs, and in this particular instant, sounds emulating those of whips. The whipping sound isn't that of real whips though as it was hopeless to capture properly in the studio. Instead it's the Mute label boss Daniel Miller hissing and spitting and thus creating a similar effect. Some silly pop trivia for you there, and here's the song: 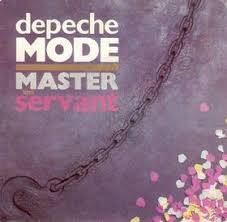