Vince Clarke was the brain behind the Depeche Mode debut album Speak & Spell, after which he left the rest of the group to their own devices and went on to form Yazoo together with singer Alison Moyet. Depeche Mode did indeed soldier on and Martin Gore became the band's new songwriter, and the rest is of course history. Depeche Mode became huge, and on their fifth album Black Celebration they recorded a song called "Fly On The Windscreen (Final)". Now Vince Clarke of all people (probably as a result from his recent collaboration with Gore in the project VCMG) has recorded that particular song, enlisting vocal help from Norwegian singer Ane Brun. The result is dark and moody, and quite frankly, mesmerizing. And the song has actually been recorded for a video trailer to the book "Blessed" by Tonya Hurley. Weird. 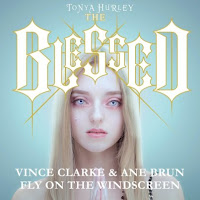