"Tupelo" is classic Nick Cave & The Bad Seeds, the only single to released from the band's 1985 album The Firstborn Is Dead. The song tells of the birth of Elvis Presley during a heavy storm in Tupelo, Mississippi, using lots of biblical imagery, and is also loosely based on a John Lee Hooker song of the same title, and the "looky looky yonder" motif is lifted from a Lead Belly song. In every way a typical Cave song, co-written with band members Barry Adamson and Mick Harvey, a five minute dive into a really scary place, and of course it's an enormously fascinating and thrilling ride. 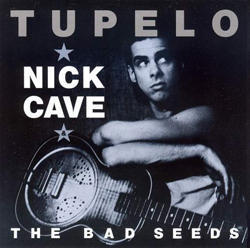