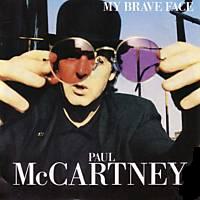 Released in 1989, Paul McCartney's album Flowers In The Dirt, came at a time when he needed to come out with something really good. Having made some rather dull records for most of the 80's, expectations were low, but Flowers In The Dirt was a major return to form. "My Brave Face" was the first single to be released from it, one of four songs on the album McCartney co-wrote with Elvis Costello, and it's simply an incredibly good pop song, one of the very best of McCartney's solo career.