Let's see... the song is "The Perfect Kiss" (1985), performed by the perfect band New Order, and on top of that it's the perfect New Order song with all the right ingredients, including of course a melody most songwriters would kill for. It also happens to be the first single the band released that also appeared on an album at approximately the time of release, in this instant the wonderful Low-Life, my favourite New Order album. Some pop trivia to finish this off: The single was, as many people are aware, released on Factory Records in Manchester, and the catalogue number was FAC 123 whereas the accompanying music video was given the opposite number, FAC 321. 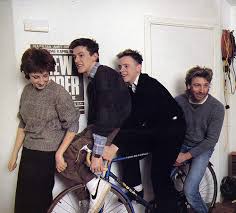