And happy 54th birthday to Robert Forster, formerly of The Go-Betweens, until his partner in crime Grant McLennan died in 2006. The Go-Betweens moved from their native Australia to the UK in 1979 and established themselves as a major indie label band (now there's a contradiction in terms) meaning they were very successful and truly respected on a small level, mostly recording for independent labels. They disbanded in 1989 and Forster and McLennan pursued their solo careers, then they found back together in 2000 and recorded three excellent albums before McLennan died. The album Spring Hill Fair (1984) was their sole album released on a major label - Sire - and the single "Bachelor Kisses" is one of their most intoxicating. A simple, yet really beautiful pop song, it's timeless to my ears. A song that is diffucult not to fall in love with. 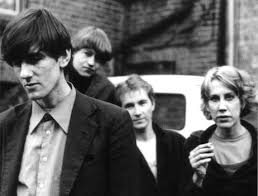