Fantastic Something - If She Doesn't Smile (It'll Rain)

Here's one of my all-time favourite summer songs, and at the same time one of my all-time favourite songs of any kind. Fantastic Something were two Greek brothers (?) who released this one single on the eclectic Cherry Red label in 1984, then went on to record and album that was released on the Blanco Y Negro label, home of former Cherry Red bands Everything But The Girl and The Monochrome Set, in 1985. I don't know anything about these guys, and they totally disappeared from view after their one album. It was later released a kind of "lost" EP with four or five songs, and that's it. But the lovely, Simon & Garfunkel-inspired "If She Doesn't Smile (It'll Rain)", is the one they'll be remembered for. Enjoy this song! 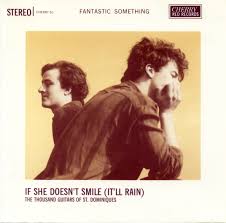