I read an interview with Emmylou Harris in today's edition of Norwegian newspaper Dagsavisen, where she tells of a forthcoming duet album with Rodney Crowell. I quote: "It's taken 35 years to get there, but we'll do it this year. I'll also record and album with Shawn Colvin, Patti Griffin and Buddy Miller." Harris helped Crowell with a fantastic version of Bob Dylan's classic "Shelter From The Storm" on his great The Outsider album in 2005, so this should be very exciting indeed.

Listen to Emmylou and Rodney perform "Shelter From The Storm" here. 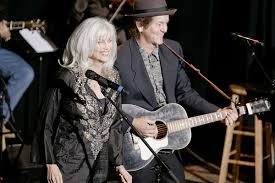