Carlos Santana all of a sudden became wildly popular again after several years in the musical dustbin when he released the collaborative album Supernatural in 1999, conceived by label boss and longtime friend Clive Davis. Much of the success can be attributed to first single "Smooth", co-written (with Itaal Shur) and sung by Matchbox Twenty singer Rob Thomas, an immediately infectious latin pop song, that conquered the world and made Santana famous with a new generation. 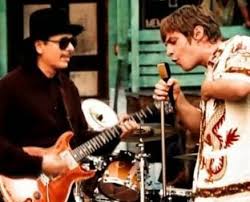