"Try A Little Tenderness" is not a Stax original, as many people may think, but actually a love song written in 1932 by "Irving King" (a pseudonym for British lyricists James Campbell and Reginald Connelly) and songwriter Harry M. Woods. It was however popularized more than 30 years later by different soul acts, among them the great Otis Redding who made a stirring and intense version backed by the Stax house band, Booker T & The MG's. This take is actually from Oslo, Norway, in Njårdhallen, in 1967. 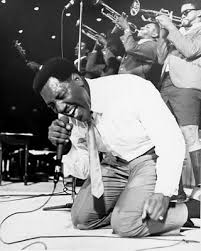