Norwegian act Folk & Røvere (a.k.a. Ulf Nygaard and associates) will be releasing their new album Hvis du ikke finner meg, så let i byene (If you can't find me, look for me in the cities) on May 9th, preceded by the single "Fremmed" (Stranger). It's a wonderful, laidback song, featuring Ulf - or Ulph as he is known when acting as a musician - and his characteristic, "whispering" voice, with back-up vocals by the band's new singer Therese Lech, sister of former F&R singer Beate Slettevold Lech. She's far more audible on other tracks on the album, and her voice is great, so look forward to that. There will be a release party at Ulph's favourite hang-out Fru Hagen - at least it used to be his favourite - in Oslo's atmospheric neighbourhood Grünerløkka on May 1st. 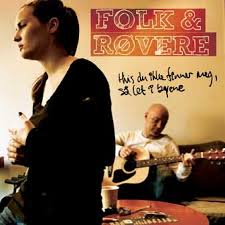