The Easybeats - Friday On My Mind

George Young and Dutch-born Harry Vanda were the creative nucleus in Australian 60's pop band The Easybeats, scoring their biggest hit with the 1966 single "Friday On My Mind". The pair would later go on to become highly sought-after producers and songwriters for acts such as AC/DC (which featured Young's two younger brothers Angus and Malcolm), Rose Tattoo and John Paul Young, and they also made their own records under the moniker Flash And The Pan. 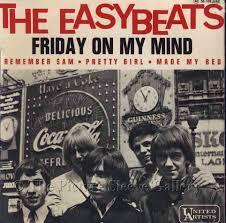