She & Him, "she" being actress and singer/songwriter Zooey Deschanel, "him" being noted singer/songwriter and producer M. Ward, have released two excellent retro-sounding albums as well as a Christmas album. "In The Sun" was the lead single off album number two, meaingfully titled Volume Two (no prize for guessing the title of the duo's first album) and is a sun-drenched song of the kind to make you smile broadly. It was released in 2010. Enjoy! 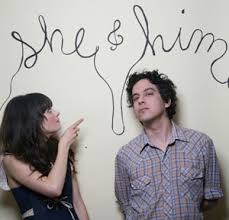