Flight Of The Conchords - Feel Inside (And Stuff Like That)

New Zealand comedy group Flight Of The Conchords who made two seasons of their fabulous TV series for HBO has been MIA for awhile, but now they're back with a great charity single for Red Nose Day Comedy for Cure Kids called "Feel Inside (And Stuff Like That)". The lyrics to the song is the result of interviews the two - Jemaine Clement and Bret McKenzie - has done with children that you can see before the actual music video they made with a score of New Zealand artists, among them Dave Dobbyn, Boh Runga and Brooke Fraser. If you just want to hear the song that starts at five minutes into the video, but it's really worth watching the interviews. 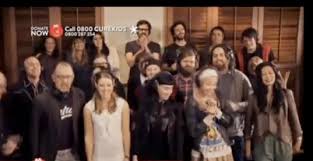