Complete Columbia Albums Collection is the title of a forthcoming monster box set being released this October collecting all of Johnny Cash' output for the Columbia label - and then some. The 63 CD set will set you back financially, but I think it might well be worth the price of around 150 British pounds, 275 US dollars or 2000 Norwegian kroner, or whatever currency that's in use where you live. Judging from the press release a painstaking effort behind the box set should ensure that this really is definitive, with all his Columbia albums in exact replica sleeves, a giant book containing information about songwriters, recording dates and so forth, as well as two brand new compilations (one featuring 28 tracks from his days on Sun Records, the other, a 55 song, " CD set, focusing on non-album singles and guest appearances). The release date is October 29th. 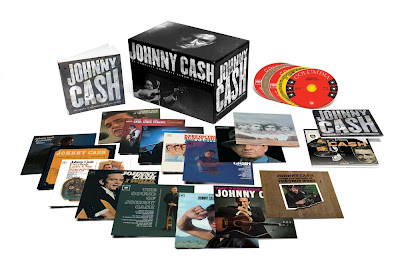