Au Pairs - Stepping Out Of Line

Au Pairs was a British post-punk band that released two excellent, politicized album, Playing With A Different Sex (1981) and Sense And Sensuality (1982). "Stepping Out Of Line" stems from the latter, six minutes of highly energetic rock music that sounds as if their lives are at stake. A post-punk classic that is basically lost from rock history's collective memory. Stepping Out Of Line is also the title of a 2CD set that compiles all their recorded work. Recommended. 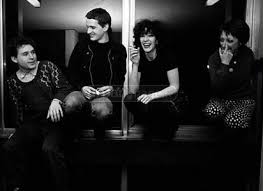