Underrated genius American singer/songwriter Tom Russell has recorded his most famous song "Gallo del Cielo", the story of a young Mexican trying his luck with the fighting rooster of the title and failing miserably, numerous times. Also, there's probably not a show he's done without playing it. "Gallo del Cielo" is simply a masterclass in storytelling within a song, a deeply tragic tale of despair, hope, possible fortune and redemption, and eternal shame, going on for verse after verse, chorus after chorus. The best recorded version of the song is from the 1989 Tom Russell Band album Poor Man's Dream, and Joe Ely has also recorded a killer version. Below you'll find a clip featuring only Tom and guitar player Andrew Hardin from the 2005 DVD Hearts On The Line. Listen to the story Tom is telling and weep for Carlos Zaragoza. 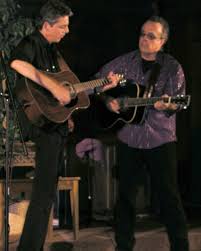