Amazing! In connection with their upcoming world tour, The Beach Boys are preparing their as yet untitled reunion album, for a planned June 5 release. According to band member Bruce Johnston the album reminds him of the classic Sunflower album, and first single "That's Why God Made The Radio" certainly sounds good. Don't expect a revolution in your head when hearing it, but it sounds like classic Beach Boys in every way.

Listen to the single here and read a story about the upcoming album on Billboard.com. 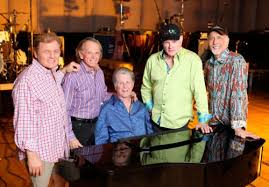