Formerly one half of Norwegian hip hop duo Paperboys, Vinni (Øyvind Sauvik) is now a solo artist with newfound success after his participation in feelgood TV show Hver gang vi møtes (Every time we meet). He's switched from singing in English with Paperboys to Norwegian as a solo artist, and his new single "Halve meg" (Half of me) is an amazing song from the forthcoming album Oppvåkningen (The awakening). It's a brutally honest song about the break-up with his wife, where he duly puts the blame on his own doorstep. Musically, as well as lyrically, this is a bit reminiscent of something Eminem could have done, and it's a song unlike anything I've heard in Norwegian before. Frankly, I'm impressed. This is a very good, autobiographic song. 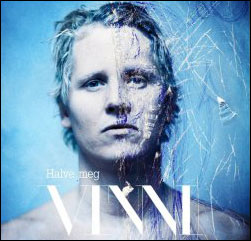